The Shiranui Sea is the second of the Minamata documentaries released by Zakka Films and widely considered to be Tsuchimoto’s masterpiece. If Minamata: The Victims and Their World (also released by Zakka) follows the victims in their struggle for compensation for suffering from Minamata disease, Japan’s most notorious case of environmental pollution, The Shiranui Sea provides a beautifully lyrical and compelling portrait of their everyday lives and difficulties. It is both a profound expose of how government and industry can undermine the environmental foundations of daily life, and a model for how documentary can humanely reveal human suffering.

“The Shiranui Sea is a transcendent film in its lyrical evocation of place, in its formal audaciousness, in the sensitivity and firmness of its approach to its human subjects, and in the beauty of the tribute it pays to humanity revealing itself under extreme conditions.”——-Chris Fujiwara, Film critic and artistic director, Edinburgh International Film Festival 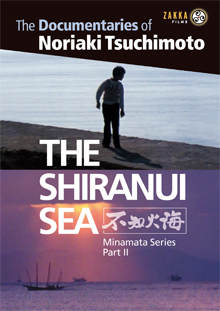